Props are an important feature of every movie, and they can be anything from a laptop, to a vehicle, or even a military shelter.

It is essential that any prop used in a movie is either real or believable as real. For theater this isn’t as important, since the audience cannot see the props up close enough to notice any imperfections and assume stage props are designed for ease of use, mobility, and to convey a sense of place – beit a bedroom, bridge, or factory. This isn’t true for television and movies, where advances in technology have produced ultra-high definition screens capable and show the finest of details.

With such an emphasis and need for detail, television and movie props, as well as movie sets, cannot be sub-par and appear fake, at risk of the audience taking notice and negatively altering the viewing experience or breaking the magical ‘spell’ that draws a viewer into a movie or television show. Having actual artifacts, or items used in the real world, however, purchasing is typically costly and may be outside the scope of the production budget.

So, when Paramount Pictures, 20th Century Fox, Disney, or other production companies are looking to source and secure the props they need for their next full-length movie, it often makes more sense to rent or lease the actual article rather than buying or building their own.

Coming Soon To A Theater Near You…

“12 Strong – The Declassified True Story of the Horse Soldiers” will premier in the United States on Friday, January 19th. Since 1999, more than 36,000 military shelters and 23,000 military ECUs (Environmental Control Units) have been deployed around the world, supporting all aspects of military operations including:

The military camp featured in “12 Strong” was built using (20) Alaska Defense military shelter systems. Set against a stark desert background and features the same military shelter systems used by the U.S. Department of Defense (DoD) and allied forces around the world. The onscreen visual lends to the authenticity of the story and created a realistic movie set for audiences to enjoy.

“12 Strong” is the most recent movie that has utilized Alaska Defense for onscreen appearances, and behind the scene support structures. Below are additional movie productions that feature Alaska Defense fabric buildings or military shelter systems.

Distributed by: TriStar Pictures (a division of the Sony Pictures Motion Picture Group) 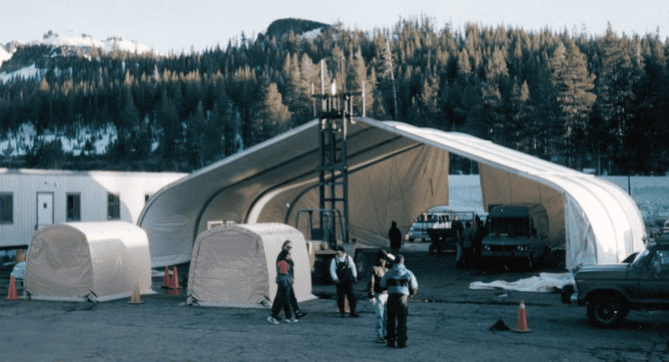 Contact us today to by calling +1-910-323-0562 to discuss your upcoming movie or television production needs. An Alaska Defense representative will discuss leasing or purchasing options. Or send us an email to inquiry@alaskadefense.com or use our online contact form.